Only had my watch a week and I’ve already received many compliments and comments on it. Love it!

I HAVEN´T RECEIVED MY PRODUCT

And you are best again😍

The wait for the Rival UA was worth it. The colors, especially with the included rubber watch band, are vibrant and frequently bring comments and questions. Also, doing something in a small way to support Ukraine in its conflict also feels right. The Rival UA and Blade Acid are two of my favorite watches to wear. Keep creating Zinvo team!

Look really good on my wrist and I love it

When I wore my Zinvo Rival UA for the first time, it was to the Hollywood Bowl on August 12. They played the Ukrainian National Anthem in solidarity with the Ukrainian people. While waiting in line to get in, our friend and my wife noticed my new watch and both wanted one, so I placed the order for two more. When I put the rubber strap on mine, one of the screws was harder to screw in than the others, but seated all the way in with some effort. However, when I tried to put the strap on my wife's, two of the screws were impossible to seat all the way in. After much frustration (and some hairline scratches which I will be able to polish out with a jeweler's cloth -- she won't notice anyway), and a pause to reason it out, I discovered that there was excess material from the molding process that didn't get cut cleanly away adjacent to the screw holes on the strap causing the screws to misalign. After slicing it off the excess rubber (with a fresh utility knife blade) the screws went in easily. Also, I set my watch to the atomic clock app on August 9, and today (August 19) it is only 2 seconds slow. I'm impressed with the accuracy. So, while I really want to give a 5-star rating, the difficulties with the rubber strap installation makes it a 4. Also the watch + strap is below average in total length for a men's watch. My wrist is probably medium small and I wear it no tighter than the second hole from the tip. I compared it to my Christopher Ward C60 which I use the strap's fourth hole from the tip. If you have a large wrist, you may have to stick to the steel link band. One more thing, the window for the date is a bit small to read easily at a glance.

I use it with a Blade Watch. I like it 😀

Bought this watch several months ago along with an extra carbon fiber strap. So far loving the watch and the overall quality. What’s nice is you can switch out bands and it looks like two different watches. Will be purchasing another one

Super happy with it. Looks awesome and something a bit different. Cheers

I love this watch so much. It’s high quality and it’s badass looking. It’s so cool dude.

I was a little nervous because I have particular taste when it comes to watches. I love it. It’s one of my new favorites. Thank you.

This watch is so amazing. Love the look, and the movement. I would highly recommend if your looking for a one or a king timepiece! 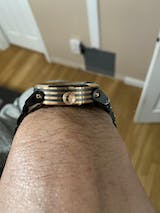 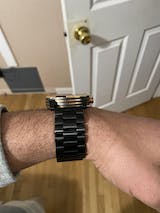 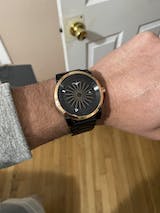 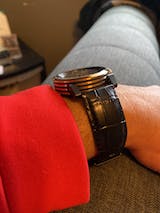 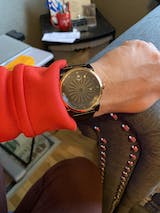 I've had to recommend this model to a few friends already, they never believe how cheap it is for the quality!